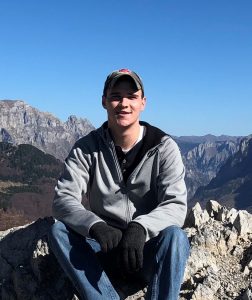 James grew up in the suburbs outside of Boston, Massachusetts. He completed a BS and MS in biochemistry at Worcester Polytechnic Institute, where his research focused on developing a new method for directed evolution in bacteria. In Worcester, he spent two summers running HPLC assays in the protein analytics department at AbbVie. His interests in biocatalysis and directed evolution lead him to a co-mentorship between the Buller lab and Tina Wang’s lab. While he was in New England, James enjoyed road tripping around the Northeast and is looking forward to exploring the Midwest. His hobbies also include golf, fishing, and video games.