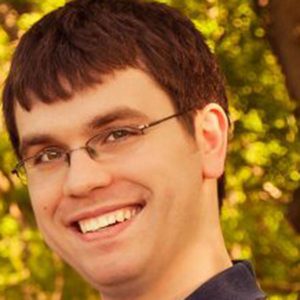 Patrick grew up in Independence, Iowa and attended the University of Northern Iowa where he earned a BS in Chemistry. After his undergraduate studies, Patrick joined the lab of Thomas R. Hoye for his PhD studies at the University of Minnesota. As a graduate student, he developed a formal total synthesis of Salinosporamide A, studied arynes generated via the hexadehydro Diels–Alder reaction, and prepared a protocol for computing conformationally-averaged NMR chemical shifts. After earning his PhD, Patrick joined the faculty at Ripon College, where he has advised undergraduate student researchers in studying organic synthesis methodology for the preparation of isochalcogenourea organocatalysts, N,O-acetals, and aryl phosphonates. Patrick joined the Buller lab as a visiting scholar while on sabbatical, and he is interested in developing biocatalytic cascade processes using engineered enzymes. When he’s not doing science, Patrick enjoys spending time with his wife, Amber, and three kids, Logan, Calvin, and Josie.